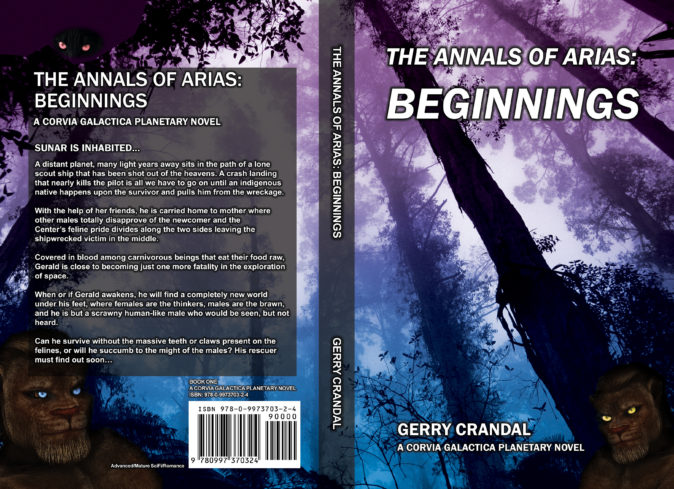 Get your Paperback Now!

The Annals of Arias

Get The Kindle Version NOW!

A distant planet, many light years away sits in the path of a lone scout ship that has been shot out of the heavens. A crash landing that nearly kills the pilot is all we have to go on until an indigenous native happens upon the survivor and pulls him from the wreckage.

With the help of her friends, he is carried home to mother where father totally disapproves of the newcomer and the Center’s feline pride divides along the two sides leaving the shipwrecked victim in the middle.

Covered in blood among carnivorous beings that eat their food raw, Gerald is close to becoming just one more fatality in the exploration of space.

When or if Gerald awakens, he will find a completely new world under his feet, where females are the thinkers, males are the brawn, and he is but a scrawny human-like male who would be seen, but not heard.

Can he survive without the massive teeth or claws present on the felines, or will he succumb to the might of the males? His rescuer must find out soon…

See this title and all of Gerry’s other Novels at Amazon Bookstore!